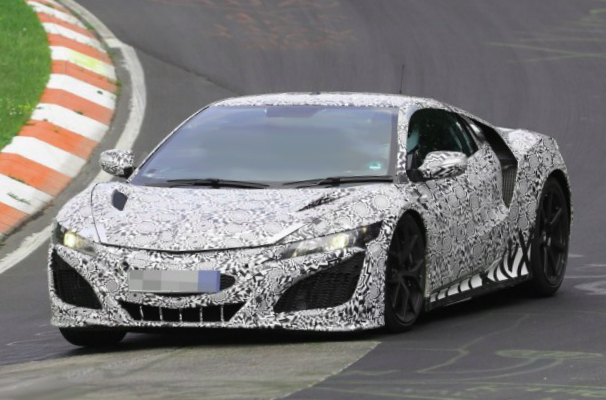 The first news about launching of the new supercar Acura NSX appeared in 2012 but we did not get the pleasure to see a novelty but only a prototype. Currently, we have also noticed a new Acura’s prototype, which may be a new car for the 2016 model year.

In spite of the prototype does not show its design, we are sure the produced car will look similar as well.

While the novelty was tested at the Nürburgring track in Germany, we noticed the car got new cooling apertures on the hood and larger air intakes.

The technical updates include the new longitudinally mounted engine in its middle position. By the way, earlier, the Acura’s engineers planned another type of the unit.

According to the carmaker, the novelty is planned to be constricted totally of aluminum.

The new NSX will be equipped with a new 3.7-liter V6 twin turbocharged engine. That unit has replaced the previous powertrain of 3.5-liter. The novelties powertrain consists of the engine with direct fuel injection and a system of three electric motors.

According to the auto manufacturer, the NSX supercar will be focused on the hybrid system. The carmaker itself names it as the Sport hybrid Super-Handling all-wheel-drive system (Sport hybrid SH-AWD).

In the hybrid system, two electric motors power the front wheels while the third one powers the rear wheels. The transmission is expected to be minimum six-speed with dual clutch.

Owing to the twin turbocharged engine with direct injection and the hybrid system of three electric motors, the novelty will have the significant output. For example, another supercar is the Nissan GT-R, which is able to produce the power of 600 horsepower when the model is in NISMO trim. Most likely, the Acura’s novelty will produce similar output.

The development and production of the novelty take place in the U.S., at the Honda’s plant in Ohio.

We would like to remind, “Acura” is a brand name of the Japanese Honda auto manufacturer for the Chinese and the U.S. auto markets. Everywhere else, there is the Honda.

The official debut and beginning of sales are expected by the end of summer next year. The auto manufacturer also said they planned to launch a convertible variant of the NSX model two years later after the introduction of that version.