The first drive of the newest Ram ProMaster City 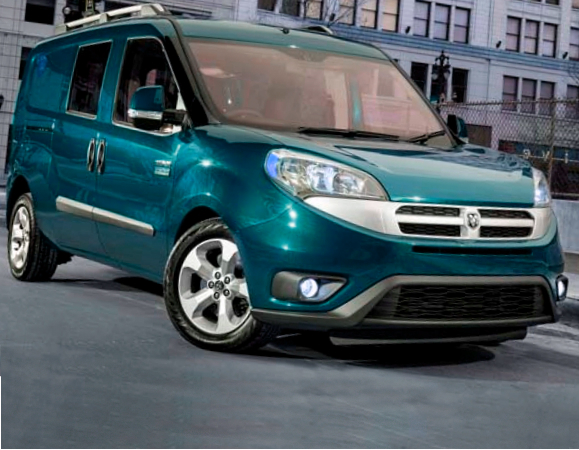 The European model Fiat Doblò van has come North America under the new badge Ram ProMaster City as a car of 2015 model year.
Owing to the ProMaster City, the auto manufacturer hopes to enter the segment of European small vans.

By the way, we would like to remind you, that first that segment of the small vans was established in 2010, when the European automaker Ford presented its small Transit Connect. Later, in 2013, the Japanese auto manufacturer Nissan introduced the NV200; soon later, Chevrolet launched the NV200 under the badge the City Express.
The ProMaster City is the latest model of the Italian-American venture, the Fiat Chrysler Automotive.

In its turn, the Fiat Doblò was sold in a number of 100,000 annually, and the car awarded with the International van of the year.

The Ram’s novelty has the largest cargo volume -131.7 cubic feet, the heaviest payload -1,883 pounds and the towing capacity of 2,000 among other compact.
In addition, the novelty is equipped with the independent dual-link back suspension.
Besides the new fully independent suspension, the car gets the increased ride height. Moreover, the engine box is widened to be able to mount a new powertrain.

The 2015 Ram ProMaster City will be equipped with the 2.4-liter four-cylinder Tigershark engine, which has been already used in the Jeep Cherokee, Chrysler 200 and Dodge Dart. The powertrain is available in both diesel and gasoline, turbocharged and not engines.

The 2.4-liter four-cylinder engine is able to produce the output of 178 horsepower and the torque of 174 lb-ft.

In addition, the ProMaster City is also offered with the 2.5-liter four-cylinder engine, which was used in the Transit Connect. And finally, the novelty is equipped with 1.6-liter powertrain EcoBoost as well.

The ProMaster City is expected to come on the U.S. auto market quite soon for the starting price of 24,125 dollars.