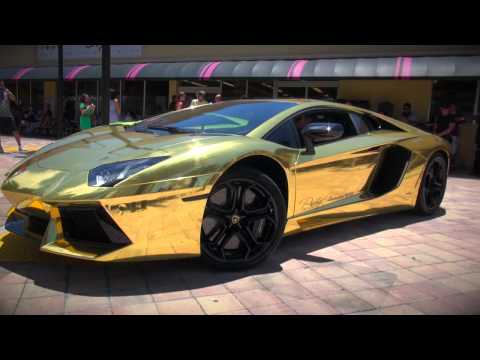 Have you ever dreamt about a car, which is made of solid gold? Probably you would like to ask: “Why for? Where can I drive it?”
Please do not jump to conclusions. Try to imagine if you have already had everything and you have an opportunity to buy whatever else what you like.
So what about a solid gold vehicle?
Especially if this car is… Lamborghini Aventador!
Whait! Don`t leave this page! We have not fallen mad offering you the golden car; we would like to know your opinion. Because the solid gold Lamborghini exists indeed.
In Dubai, the auto manufacturer introduced its Lamborghini Aventador made of solid gold, which costs 7.5 million dollars.
The weight of this treasure is 55 pounds… the car is made of a 1,100-pound block of solid gold. It is impressive, isn’t it?
The golden model is put up for auction for charity. Its initial price is 659,000 dollars.
With the purpose of security, there is a prototype of the golden car on a display of auction; this prototype is made of not so valuable materials.
Robert Gulpen announced the introduction of this car even two years ago. He promised to produce the most expensive luxury car in the world.
According to his statement, the gold is not the last specific material for building vehicles. Mr. Gulpen said that if you had money, he could make a car of whatever you wanted.
He can use gemstones and precious metals for windows, glass, wheels and an interior.
Mr. Gulpen plans to add three new notes in the Guinness Book of Records: the most expensive model, the most secure container and showcase, and the most expensive Lamborghini car.