New Toyota Mirai: The Fuel Cell Car You Can Buy 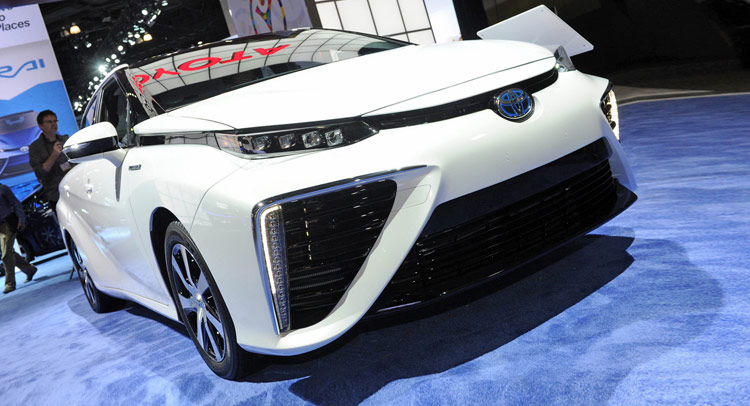 While everyone else was hinting at their fuel-cell future at the LA Auto Show, Toyota was two steps ahead revealing its production Mirai that will go on sale next year.

Hydrogen-powered cars are gaining momentum with Toyota hoping that it can replicate the success of its Prius in the near future – not necessarily with the Mirai that will be the brand's second most expensive car in the USA after the Land Cruiser, but with the following generations.

They have to start somewhere and the Mirai that will be offered for sale with a base MSRP of $57,500, not including any federal incentives of up to $13,000 that may or may not be available next year, plus three years of free hydrogen fuel, or a $499 monthly lease for 3 years, is a good place to kick off the initiative.

It makes sense only as long as you see the broader picture and how this technology, which emits nothing but water vapor, can dramatically alter our transportation future.

The Mirai”s fuel cell stack system combines hydrogen gas from tanks with oxygen to produce electricity that powers a 113kW (152hp) electric motor driving the front wheels. The tanks can be refueled in about five minutes offering a range of up to 300 miles or 483 km.

â€œToyota”s vision of a hydrogen society is not just about building a great car, but ensuring accessible, reliable and convenient refueling for our customers,“ said Toyota North America boss Jim Lentz. â€œI am happy to announce that this vision will expand beyond the borders of California and give customers the opportunity to join the fuel cell movement.“

California will be the first state to get the Mirai in fall of 2015, with Connecticut, Massachusetts, New Jersey, New York, and Rhode Island to follow, as Toyota expands its hydrogen stations.