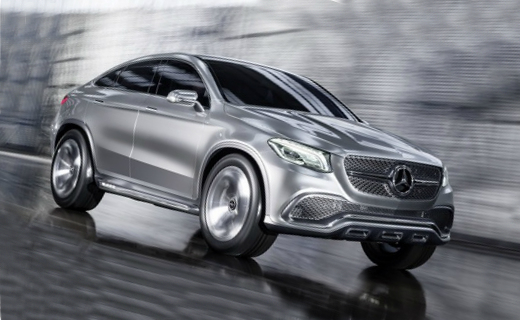 The new Mercedes M-class coupe, which may be also named as the MLC, is a new SUV based on the SUV coupe concept that has been presented in Beijing this year.
In spite of the camouflage, we are able to notice some similarities to the concept.
The novelty has the redesigned angled hood, a new lower air intake, LED headlights and a short overhang in front part of the car. The car also gets bigger wheels as well.

The car’s rear part is changed too. There are taller taillights than the concept has. But other accents such as a bluff tail, a back overhang and the high deck remained without changing.

According to spy photos, we may see that the novelty’s interior is similar to any brand’s car’s interior. There is the Mercedes style.

The new Mercedes M-class coupe SUV will meet rivals between the BMW X6 and the Audi Q6; due to this model, the Audi carmaker is entering the segment of coupe SUVs.

In addition, the carmaker plans to offer a hybrid version, which will be equipped with the 3.5-liter V6 engine and the hybrid electric unit borrowed from the E400 hybrid.
Mercedes will start the M-class coupe production next year at the brand’s plant that is located in Alabama. The novelty comes on the market as a car of 2016 model year.

We will share more details and fresh news about the Mercedes novelty with you when the M-class coupe is officially introduced.