MERCEDES-BENZ C-class is a vehicle of the middle class. The generation of a compact executive car produced by Mercedes-Benz, called C-Class (W202) introduced in April 1993 and became the official founder of “C” series. Mercedes W202 was a replacement to the popular Mercedes 190 range, produced nearly a million cars.

The new model kept the basic principles which traditionally put the Mercedes-Benz car out of time and out of fashion: it is the design in all details, the combination of traditional solutions and new technologies (such as a multi-link rear suspension as an optional feature of a classic rear-wheel-drive). This car has an excellent overview and the selection of all interior parts. Sizes are not amazed (4480x1720x1415 mm), but in comparison with its predecessor, rear seats are not so closely. The folding rear seat row allows transporting flat long things in the trunk and its threshold is located low.

The standard model is equipped with electric windows. The automatic button switches off headlights and fog lamps, there is heating of side mirrors.

The C-class is paid attention to the passive safety. The standard equipment has ABS, a driver’s airbag, height-adjustable pre-tensioners seat belts and catalytic converters of discharge gas (it is the environment care).
Firstly for many years the C-Class got different trim levels. Classic is the base trim that comes with Brighton cloth seats. Sport comes with the carbon trim of a center console and sport tires of 205/60 R15. Elegance trim as the best one of the C-class is a walnut veneer finish and a leather steering wheel according to interior color. The Esprit version has the aluminum console and reduced clearance focused on the youth. All trims can be combined with all types of engines.
Originally W202 range includes models of C180, C220 and C280, equipped with four-and six-cylinder gasoline engines such as M102.910, M111.960 and M104.942 issuing the output of 122, 150 and 193 hp and well-known diesel vehicles: C200 D, C220 D and C250 D with economical engines as OM601.911 (75 hp), OM602.911 (95 hp), OM603.911 (113 hp). However, the most attractive model is still C220 D, combining the economical four-cylinder atmospheric diesel engine (7.9 liters/100 km) with the driving agility in a city.
In October, 1993, a resourceful but economical 2.0-liter gasoline engine M 111.940 (136 hp) was presented and was a good company to a more expensive 2.2-liter engine M111.960.
There was the successful modernization of the image of the model in June, 1994. The C-class started to be equipped with standard passenger airbags and remote-controlled rear seats headrests without extra charge.
In August, 1995 the dashboard was changed. There were also dynamic models as: a turbo-diesel C250 of 150 hp (OM603.961) and a gasoline C230 Kompressor of 193 hp (Roots supercharged). Originally the 2.3 liter four-cylinder engine, having the power as the 2.8 liter 6-cylinder one, was intended only for a roadster SLK. The expansion of engine range was needed, because the power of uncharged engines were not suited the fast German drivers.
There is the tuned Mercedes-Benz C36 AMG with the “crazy” 3.6-liter V6 engine producing 280 hp and accelerates to 100 km/h in just 6.7 seconds (but consumption of the 98th gasoline comes to 17.5 liters/100 km in a city). The standard transmission of this model is a 5-speed gearbox.
In the winter of 1996 the four-door sedan W202 family was completed by the five-door station wagon Touring (abbreviated T). The luggage capacity of the compact sports station wagon of Mercedes is larger than its competitors as BMW 3-er Touring and Audi A4 Avant. This station wagon of C-class has a luggage compartment of 465 liters with the normal position of rear seats, and with folding rear seats the capacity increases to 1510 liters.
In 1996 all models of C-Class were supplemented by new heating and ventilation systems and the air filter in the cabin.
In the middle of 1997 the model was upgraded with the redesigning of a body: bumpers, a grille, spoilers and door sills were modified. The main innovations are related to the construction. There were upgraded engines and new automatic transmissions. The 1.8 - 2.0-liter four-cylinder gasoline engines of 122 hp and 1.36 hp got variable valve timing. There were two 2.3 liter (150 hp) and 2.4 liters (169 hp) gasoline engines and a 2.2-liter diesel one. According to the popular opinion, the best engine is a 2.2-liter gasoline engine and C280 with a 2.8-liter V6 engine of 197 hp is for speed fans.
In 1998, diesel engines were moved up into the Common-Rail system: C200CDI (102 hp), C220CDI (125 hp). The most powerful indirect-injection 5-cylinder diesel engine of the C250 TD model producing 150 hp and provides even better dynamics, but not economical. C-class station wagons are equipped with the same engines. Any C-class model is available with a 5-speed manual or automatic hydro mechanical transmission. But C43 AMG models are equipped with only an automatic gearbox. The 4.3-liter eight-cylinder engine of 306 hp provides them the uncommon dynamics. Besides the engine, this model is distinguished by special trim, modified bumpers, a stiffer suspension with the reduced clearance and 17-inch wheels with low-profile tires.

The standard equipment of the new C-class is the multifunctional steering wheel, Speed Tronic, the central display, ESP, the onboard diagnostic system (for gasoline engines), the local heater (for diesel engines), the automatic inclusion beam headlights and etc. The optional equipment includes a navigation system displaying the current traffic situation, the automatic Thematic Thetmotronic system with an absorbent carbon filter, an audio system COMAND, including the radio, CD-player; the voice control system of radio and telephone Linguatronic, the automatically adjustable audio system; TV, the sliding sunroof with memorized position, the system of Tele-Aid, automatically sending the SOS signal to the nearest emergency service when an accident, the TeleDiagnose system, connecting to the service center of Mersedes-Benz.
The power plants are significantly upgraded; producing the power corresponds to the similar models of BMW of 3 Series. The basic C180 comes with a 2.0-liter (not 1.8-liter) four-cylinder engine of 129 hp that is enough to compete with the BMW 318i. The same engine with interior blower is able to issue 163 hp. It is installed in the C200 Compressor. The dynamic characteristics of this car are better than BMW 320i has. The torque of 230 Nm of the C200 Compressor accelerates a car to 100 km/h in just 9.3 seconds. The top speed is 230 km/h.

Diesel models as 200CDI, C220CDI C270CDI are equipped with well-known 2.2-liter (4-cylinder) and 2.7-liter (5-cylinder) turbo-charged engines with Common Rail system producing 115, 143 and 170 hp. All of them differ in the low fuel consumption and comfort driving with even engine speed between 1500-2000 r/min. The new model C270CDI has the high speed of 230 km/h that is more than the previous model C 250 Turbodiesel by 27 km/h.
All engines are equipped with a new 6-speed manual transmission, and a hydro mechanical 5-speed automatic gearbox upon request (except C320). The C320 model is available with tip tronic.
Until 2001, all models of the new C-class were only sedans. In the spring of 2001 there was the presentation of a 3-door hatchback, and then 5-door station wagon T-Model. That’s why the production of the T model of the previous generation lasted for approximately a year. Station wagons are available in 10 variants with diesel and gasoline engines having the output of from 102 to 347 hp (from the economical diesel C200T CDI to the station wagon C55T AMG).
Since the spring of 2004 Mercedes-Benz begins selling the C-class cars in sports packages. The standard package includes 17-inch wheels with 225/45 front and 245/40 rear tires. In addition, the stiffer suspension lowered the body by 25 millimeters in front and by 15 millimeters at the rear. There are strengthened brakes on the front wheels, the oval stainless steel exhaust pipe instead of the usual one. Diesel models got two chrome exhaust pipes. Vehicles with 6-cylinder engines (C240 and S320) got the upgraded exhaust system, which has the sports car sounds. The cabin was also changed. Now there are sports seats, the three-spoke steering wheel, covers plates on pedals and velour floor mats.

More sporty drivers are offered some versions of the tuning saloon AMG. They got a new aerodynamic package and 17-inch alloy wheels designed of AMG. Four-wheel-drive cars 4Matic, which are available for tuning of AMG (C32 AMG and C30 AMG), will not receive the factory sports packages. 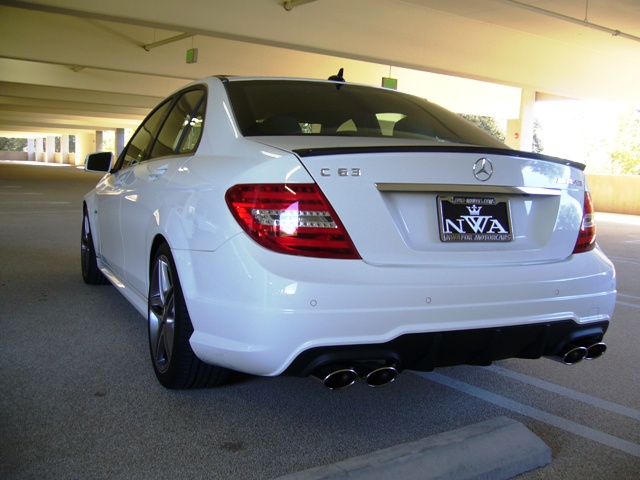