Graham 'Smithy' Smith reviews the used Volvo 240 1975-1993, its fine points, its flaws and what to watch for when you're buying it.
Driving a Volvo might not be cool, but if you look past its painfully politically correct safe and sound image you'll find a sturdy, well-built car that would make the perfect ride for the young inexperienced driver in the family. It shouldn't come as a surprise that Volvo's designers placed heavy emphasis on fuel efficiency and safety when they penned the 240 in the early 1970s. After all it came at a time of considerable conflict in the Middle East and it was feared that our supply of oil would dry up overnight.
Fearing the worst governments around the world introduced regulations designed to encourage carmakers to build smaller, more economical cars. The 240 was Volvo's response to the new rules.

MODEL WATCH
The 240 debuted in 1975 and ran with regular updates until 1993. From the outside it was rather plain and angular but the boxy shape delivered plenty of room inside, which made it perfect for families. The wagon in particular could swallow everything a family could possibly want to carry, and more.
There were three levels of luxury. The DL or Deluxe was the poverty pack model, with a carburettor engine, and basic trim. The GL was the luxury model and that came with a fuel-injected engine, power steering and more luxurious trim, while the GLE was the top model and it came with all the bells and whistles, like full electrics, alloy wheels, sunroof, and the choice of leather trim.
The 240's engine began life as a 2.1-litre single overhead camshaft unit with cast iron block and alloy head. The carburettor version in the DL put out a modest 75 kW, while the Bosch K-Jetronic mechanical fuel injection engine in the higher models produced 140 kW.
The fuel-injected engine was increased to 2.3 litres in 1981, and in 1984 the fuel injection system changed to Bosch L-Jetronic electronic and power slipped slightly to 98 kW.
There was a choice of auto or manual transmissions. Early cars had a Borg-Warner 35 three-speed auto or four-speed overdrive manual, but a five-speed manual arrived in 1983, followed a year later by a four-speed Aisan-Warner auto.
The suspension was conventional MacPherson Strut at the front and live axle at the rear. In standard trim the 240's ride was comfortable and its handling secure, and with some tweaking of the springs, shocks and sway bars it could be transformed into quite a sporty ride.
Its steering was precise rack and pinion, and brakes were disc front and rear.
ON THE LOT
Values of 240s vary from $500 for a "giveaway" 1975 model to $9000 for a 1993 model which represents the best value, and must be a car worth considering for young drivers about to take to the road for the first time.
Be careful when checking a car though and make sure the odometer is working. Odometers are prone to failure and owners happily motor on without getting them fixed, which means you can't tell how many miles it's really done. If you find the odometer isn't working ask for proof of mileage. 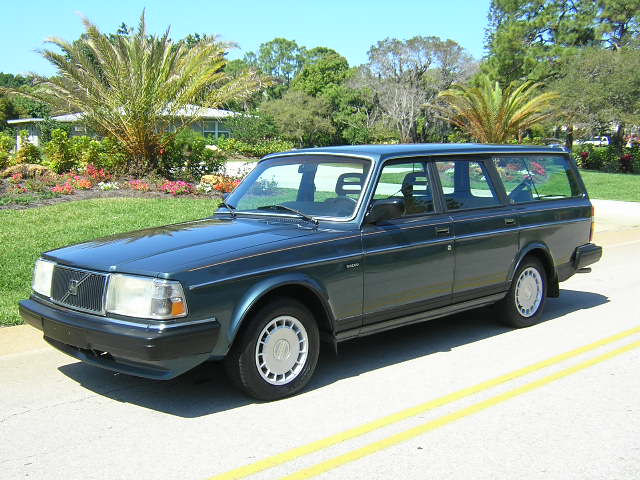 IN THE SHOP
It takes a lot to kill a 240, they're almost indestructible, but if you manage to pull off the impossible they're not hard, or expensive, to fix.
The good news is that there are lots of 240s around and secondhand parts are easy to find and cheap to buy. An added bonus is that there is a high degree of interchangeability of parts; a guard from a 1975 model will bolt straight up to a 1993 model for instance and there are plenty more parts that will do the same.
Rust isn't a major problem with the Volvo, the bodies were well rustproofed and don't seem to corrode as much as some other cars. If rust is evident in the doors or guards, check for crash repairs because the rust is probably due to poor repairs at some stage.
The most likely places you'll find rust are around the side windows on the wagon, and around the lower corners of the windscreen on sedans.
The four-cylinder engine is good for 400,000-plus kilometres and there are plenty around that are testimony to that. One owner boasted that his 240 is still running like a clock with close to 700,000 km on the odometer.
Early cars will happily run on unleaded fuel, but later cars between 1984 and 1986 with a higher compression ratio will ping of unleaded or lead replacement petrol and need a higher octane fuel like PULP to run happily. One solution to this is to reduce the compression ratio, which can be done for around $400, or $800 if you choose to recondition the head at the same time.
Oil leaks can be a pest on the 240's engine. Front seals are prone to leaking but these can be routinely fixed when the cam belt is changed at the recommended 60,000 km intervals, and leakage from the rear main seal is not uncommon.
The 240's driveline is bullet proof. Little trouble is reported from the auto or manual trans and the diff lasts forever.
The interior trim is hard wearing and stands up quite well to the harsh Aussie conditions. Cars that have been exposed to the sun all their lives will probably have crashed crash pads.