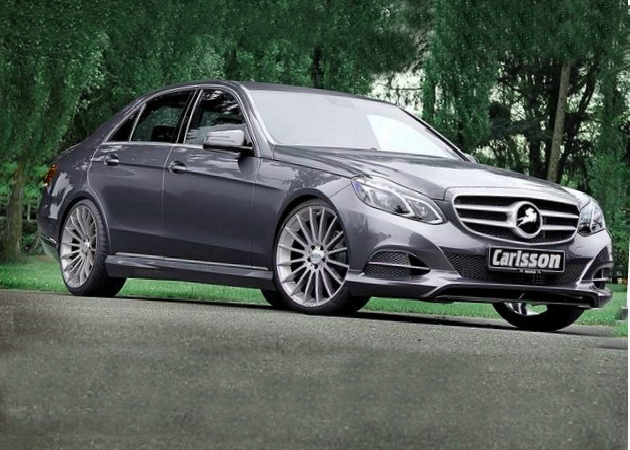 The auto manufacturer Mercedes has already worked with Carlsson when updating the Mercedes S-class of 2014 model year. Now it will be the 2014 sedan of E-class.

According to the carmaker, the redesigned E-class come on the market soon after the latest CLA-class and golden S-class of 2014.

Carlsson is working not only on exterior updates but also improving powertrains and technologies. The improved diesel engine of the E400 sedan will be able to produce the output of 385 horsepower. The E500 sedan, which is equipped with the V8 engine, will be boosted from 408 horsepower to 523 horsepower and the torque from 354 lb-ft to 405 lb-ft.

Currently, the Carlsson Company does not declare the acceleration of cars from 0 mph to 60 mph. However, we have known that the E500 got the electronically limited top speed of 185 mph.

Moreover, Carlsson is ready to offer for diesel models of E-class some other features. There is the C-Tronic Diesel Power SW CD35 kit for the E350 CDI Bluetec, which increases the output from 256 horsepower to 310 horsepower and the torque by 59 lb-ft to 516 lb-ft.

In addition, there is a new intercooler and a sports exhaust system that are available for small diesel engines. Owing to it, the car is able to get more powerful from eight to nine additional horsepower.

Gasoline powertrain have been also updated. The E200 CGI gets the output of 211 horsepower instead of previous 184 horsepower due to C-Tronic CB 20-25. The E250 CGI has been boosted by 27 horsepower and currently its output is 231 horsepower.

We should not forget about redesigned exterior of the E-class cars by Carlsson. The models get a new back diffuser, new side skirts and a spoiler in front.
The vehicles get 18-inch or 20-inch low-key wheels as well.

The Carlsson’s E-class cars are equipped with a new adjustable suspension that is able to low by 0.7 inches on the back and by 0.5 inches in front.

The carmaker offers its brand’s Airmatic suspension while Carlsson prepares the C-Tronic Air 4 with a function to low by 1.1 inches.

Now Carlsson has not announced prices for updates E-class models yet. However, it is known that prices will depend on suspensions, wheels and, certainly, interior features.