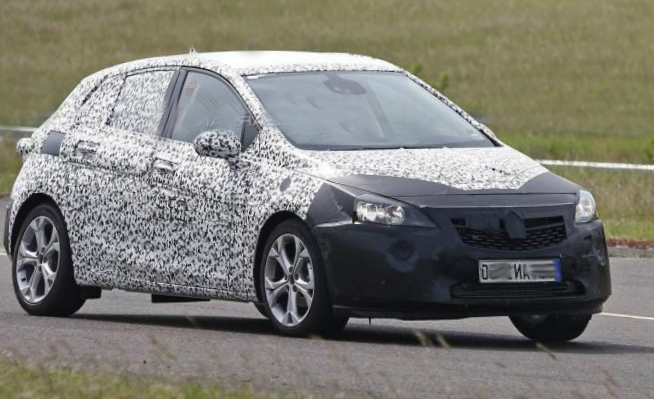 The one of the largest auto manufacturers General Motors has recently finished developing of the Chevrolet Cruze of 2016 model year. The carmaker does not plan to stop using its new D2XX platform for compact cars. Basing on that platform, the auto manufacturer is working on development of the new Opel Astra.

A prototype has been already noticed. It has gotten redesigned headlights as much as taillights.

Certainly, it is too difficult to descry new design details and elements because the future novelty is covered with the camouflage. However, we can see, the proportions are still similar to the previous version of the Astra. The new Opel Astra will be offered as the hatchback with five doors.

Styling of the novelty may be influenced by the Mazda concept presented in 2013 and the recently introduced Buick Excelle, launched specially for the Chinese auto market as a vehicle of 2015 model year.

As well as the present version of the Opel Astra, the new version will be available in different variants: a sedan, sporty Tourer wagon and a coupe GTC as well.

The powertrain for the novelty is an engine from the latest Ecotec family powertrain developed by General Motors. The new Astra will be available with three-cylinder and four-cylinder engines with both diesel and gasoline flavors.

Most likely, the carmaker will produce a plug-in hybrid and even the high performance variants of the new Astra.

The present version of the Opel Astra was produced in 2009, and then in 2012, the model was updated for the middle cycle. The version, which is on worked now, will come on the auto market next year.

According to the automaker, the official debut of the 2016 Opel Astra will take place at the auto show, which will be held in Frankfurt this September. By the way, the novelty is a part of the Opel strategy DRIVE!2022. According to that strategy, the auto manufacturer plans to launch 27 new models and 17 new engines by 2018. There are other novelties of Opel –they are the Corsa, Karl and a middle-sized Insignia of the next generation.

As usual, the European version of the Opel Astra will be also sold on the Australian auto market. There, the novelty will be known as the Holden while in the U.K. the Astra is offered under the Vauxhall brand.

Moreover, the latest D2XX platform will be used in the Verano of the next generation, which is expected to come into the auto industry in 2016.