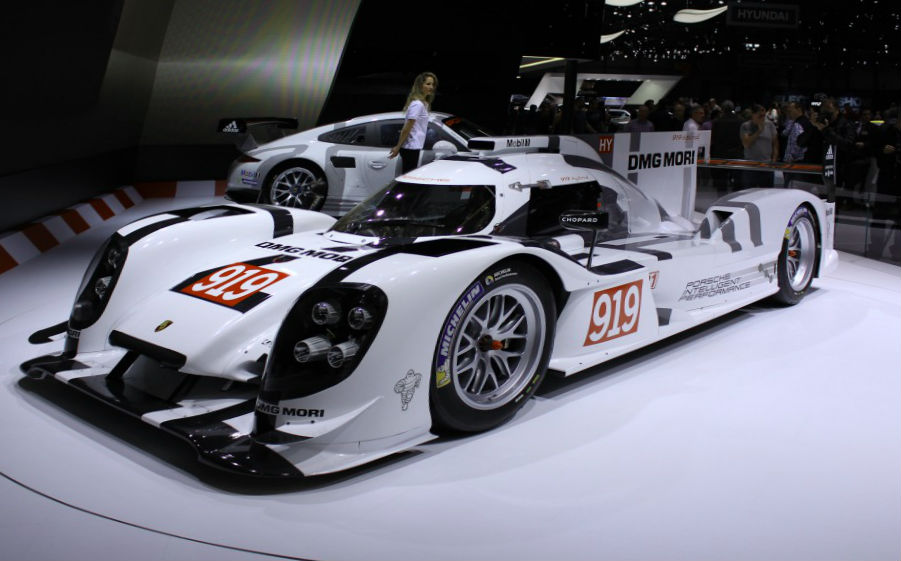 Porsche 919 hybrid prototype for racing at Geneva motor show.
This week the Porsche carmaker has shown its new Le Mans hybrid prototype, which is planned to take part in the World Endurance Championship competition of this year. If we look at this new prototype, we will notice that it is the new 919 hybrid model, introduced by Porsche this year.

The Porsche brand often participates in the 24-hour Le Mans contest; it has won about 16 times but it is no easy work to build a car from scratch, in consideration of taking part in competition with such serious rivals as Toyota and Audi.

The future racecar prototype is equipped with a 2.0-liter V4 turbocharged engine with direct injection, which produces the power of 500 horsepower.

Moreover, the 919 hybrid is equipped with two energy recovery systems. The first one is able to recover the thermal energy by the special exhaust stream with an electric generator from the exhaust pipe. And the second system includes the generator recovering the kinetic energy into the electric one during the car breaking.

What about the Porsche’s main rivals, they are also preparing their vehicles to introduce at the Le Mans track in time.

The new Audi R 18 will get a combined powertrain includes the hybrid system and a diesel engine TDU as well.

The Japanese auto manufacturer Toyota has not released details about its novelty TS040. However, there is information that the Toyota’s car will be equipped with V8 powertrain.

Besides the new race hybrid vehicle, the Porsche maker introduced another model –the 911 RSR. This new racecar will come on the auto world next year to participate in the 24-hour Le Mans contest. This novelty gets the 4.0-liter six-cylinder flat-mounted engine, producing the output of 470 horsepower as well.