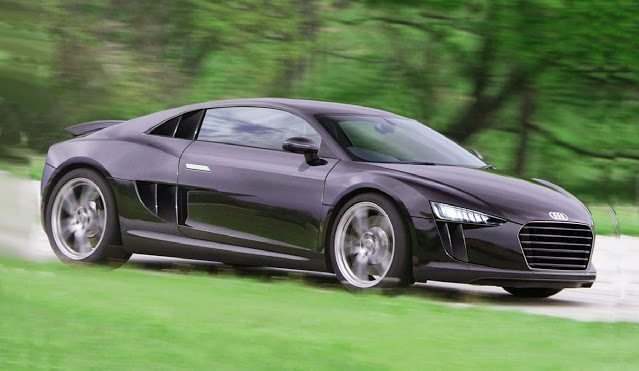 We are happy to share new spy photos of the next generation of the Audi R8. This model is developed jointly with the Lamborghini Huracán LP 610-4 that shares the platform. Most likely, the new Audi R8 comes on the market as a car of 2016 model year. Currently, the carmaker produces its new R8 LMX.

The Audi Company uses its horizontal themes of the 2016 TT it the future R8. The novelty gets flatter and wider lights in both front and back, the grille became more rigid hexagonal and the exhaust pipes are rectangular. Moreover, the car has the massive diffuser on the back bumper.

In spite of one platform, the new R8 is longer and wider than the Lamborghini model. The Audi R8 is designed as the daily supercar with a spacious cabin and comfort ride as well.

The car will be stiffer and lighter by 130 pounds than the present version due to using carbon fiber. Thus, we are expecting the new R8 will weigh about 3300 pounds; in compare, the current version weighs 3,439 pounds.

The engine range will include similar units as the current R8 has. The novelty will be equipped with the 4.2-liter V8 in a basic variant and the 5.2-liter V10 in a topper version. The V10 unit is the same as the Lamborghini car has so it will issue the power of 601 horsepower.

Unfortunately, the new R8 is not be offered with a manual gearbox; the seven-speed S-tronic dual clutch is standard.

The interior includes some elements that we may find in the Huracán and latest TT model.

According to Audi, the auto manufacturer plans to produce the next generation of R8 with e-tron. Due to an improved battery, the car range has to become nearby 280 miles. The carmaker plans to launch R8 e-tron next year.

Moreover, the new R8 will be offered with downsized turbocharged powertrains, which will not be available in the U.S., as well.

Currently, Audi is also working on a racing variant of the R8 that will be offered as the LMS.

The 2016 R8 production is conducted at the brand’s plant in Germany.

The official debut of the novelty is planned at the annual show in Paris, which takes place this October.