BMW X5 is the first full-fledged off-road car for their long history of BMW. Owing to an impressive clearance, all wheel drive and the all-wheel independent suspension this car is intended for driving on any roads. BMW X5 was presented at the Detroit Auto Show in January, 1999 and in the spring of 2000 it was on the European market. BMW X5 is based on a completely new platform. In contrast to traditional off-road cars it has the frameless body. 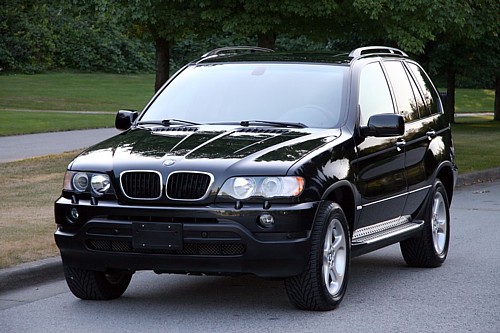 The design is bright and respectable. The tailgate is the double door and without a spare wheel. The trunk is large, and the configuration of the cargo compartment does not provide transporting large items.

The cabin is comfort and luxury that are inherent in the luxury cars. The decoration was made of leather and wood inserts. The steering wheel has a lot of adjustments. The driver's and passenger seats can be also configured in accordance with desire. The high seating position provides excellent visibility. The abundant list of standard equipment includes the automatic climate control, the electric glass sunroof, front and side airbags, the heating of front and back seats, audio CD-Changer for 6 CDs, xenon headlights, headlight washers, the rain sensor, light cast wheel rims.

BMW X5 is equipped with an all-aluminum V8 engine of 4.4 liter and output of 286 PS. It can speed up the car to 100 km/h for just 7.5 seconds. Owing to the proprietary system of variable distribution of gas Double Vanos, the engine works with almost maximum efficiency in virtually all range of rotations. The power-generation set works with hydro-5-speed gearbox Steptronic. The off-road car has all wheel independent suspension, and the distribution of the torque-axis is controlled by electronic, which slows down skid wheels facilitating the transmission of large torque to the other wheels. The rear suspension is equipped with a system of maintaining clearance regardless of the static load that is achieved with air springing mediums that are controlled by electronics.

The height located brake system increases the braking force owing to the enormous brake discs, which are mounted on all four wheels and Dynamic Brake Control when the driver begins to actively push the brake in any critical situations. The hill descent system is worthy of the special attention. This special system supports the steady, direct descent from the rising ground at a speed of about 10-12 km/h. In 2003 the updated version of BMW X5 was introduced. Its differences are the redesigned body and a number of technical innovations including the reconstructed all-wheel drive system. The characteristic features of the updated version are more expressive hood gradually turning into the gitter, which is also changed. The car has got a new front bumper and redesigned front and rear headlights. The all-wheel drive system xDrive was reconstructed a lot. It continuously controls the traffic situation and the mode of motion and is able to dynamically distribute the torque between the axles if it is necessary. And it does not happen only when driving on rough terrain, but also during high-speed turning. The multi-plate clutch with electronic control of the all-wheel drive system provides a fast response to changing of road surfaces.

During the modernization X5 received two new engines: the 4.4-liter gasoline V8 engine and the 3.0-liter diesel engine with the Common Rail system. The gasoline power-generation set with the system of stroke adjustment of valves Valvetronic, double-Vanos and the intake system with continuously variable length of the intake tract has the output of 320 PS and can speed up the car to 100 km/h for 7.0 seconds. The highest speed is 240 km/h on the assumption of the equipping by tires “V class”. On the assumption of the equipping by tires “N class” the maximum speed electronically limited to 210 km/h. The engine is equipped with a six-speed automatic gearbox.

The six-cylinder turbo diesel engine develops 218 PS. It speeds up the car to 100 km/h for 8.3 seconds, and the highest speed is 210 km/h. This engine pulls the car regardless of road surfaces owing to the impressive torque of 500Nm in a very wide rpm range. The fuel consumption is low - only 8.6 liters. The basic configuration has this engine with the six-speed manual gearbox and with the six-speed automatic gearbox by making out an order.

In 2006 at Paris Motor Show, BMW introduced the second generation of the SUV. The car became much larger than its predecessor, received more aggressive and expressive design of the body and interior. The length increased by 20 centimeters to 4.85 meters that allowed to construct more spacious and comfortable cabin, and also put the additional third row of seats increasing the capacity of the jeep to seven people. The shape retains the same proportions the lower part of the body is protected by the black plastic bodywork. The body became more plastic, sculptural. The color of the original shapes of headlights and the expressive gitter attract the attention. There are intakes enhanced by the contrast material along the edges of the front bumper. 18-inch wheels are in the standard packing arrangement and 19 or 20-inch wheels – by an order. The BMW X5 has the best drag coefficient - Cd 0.33.

The interior is more conservative and comfortable because of smoother shapes. There is the new dashboard. BMW X5 is equipped with Adaptive Drive. Adaptive Drive constantly controls many factors: speed, angle of banks, the body and wheel acceleration, the position of the body to the height owing to a lot of sensors. The engine stabilizers and absorbers of electromagnetic valves are controlled on the basis of this information. Thereby there is a constant adjustment of heels and the cushioning effort, depending on traffic conditions.

The base engine was a three-liter six-cylinder petrol engine with the output of 265 PS. It can speed up X5 to 100 km/h for 8.3 seconds. The eight-cylinder 4.8-liter engine with the output of 367 PS speeds up the SUV to 100 km/h for 6.5 seconds and the highest speed is 240 km/h. The gasoline engines are completed by the three-liter turbo diesel of 272 PS with two superchargers.

The technical equipment is at the highest level. The active steering system allows changing the driving gear ratio of the steering gear depending on driving conditions: a driver can not grabbing the steering wheel when parking. Brakes are not also simple – they are automatically cleared of moisture in the wet weather, prepare for emergency braking during the sharp lifting foot off from the accelerator. The smart system applies the extra effort to blocks for overheating. Electronics will start moving on a scarp. X5 is equipped with parking system consists of front and rear cameras.

As an option is Head-Up Display the system of projecting the data on the windshield. Important information of the motion parameters such as speed or navigation tips is ergonomically displayed on the windshield, directly in the field of vision. The third-row seat is also an option because the standard is the five-seater car.

In 2010 the manufacturer made the restyling of that model. The updated model successfully was introduced at the International Geneva Motor Show. The developers had the difficult task of surpassing themselves and made the very successful car even better.

The updated version has the new gitter, larger intakes, the re-shaped front bumper, headlights and tail lights. There are rings of light-emitting diodes around headlights that look very impressive. The car became more dynamic and aggressive but also elegant. The next changing is the new color (popular brown, the growing of number of elements painted in the body color in the front and back areas). The picture is completed by the new design of light cast wheel rims.
The interior was not changed there is the usual Bavarian comfort there. There are transformation opportunities, rich standard equipment and high-quality materials. As an additional option the third row of seats can be replaced for comfortable carrying up to seven people.

The volume of the truck is from 620 to 1750 liters. Another nice addition is glass holders (that were not in the previous model). The standard equipment includes the new generation of the iDrive control system that offers additional features for a comfortable and intuitive control of all functions of the serial and the optional systems of audio, navigation and communication. The 8.8-inch display system iDrive, the 4-zone climate control system, the DVD Entertainment system, a panoramic glass roof, ventilated front seats and heated steering wheel can be placed by the customer request.

The main changes are hidden under the hood. All engines became more powerful, more economical and more environmentally friendly at the same time. There is the choice of a couple of gasoline engines - the straight-six-cylinders of 35i/306 PS engine and the V8 of 50i/407 PS engine, six-cylinder turbo diesel of 30d/245 PS engine and the engine of 40d/306 PS. By the way, gasoline engines were changed completely: the 4.4-liter twin-turbo engine took the place of the former atmospheric flag engine with volume of 4.8 liters. And the former six-cylinder engine is replaced by more advanced one with a turbocharger. All engines comply with the Euro 5 toxicity. Besides upgraded engines BMW produced the new eight-stage automatic gearbox ZF (first there was the six-stage gearbox). The new gearbox has the torque converter with reduced losses and increased range of gear ratios.

BMW X5 of 2010 includes virtually all latest technological innovations developed by Bavarian designers. Among the principal innovations in equipment of X5 of 2010 are the active steering system that was used in the coupe and sedans of BMW before. The active steering system allows the greater flexibility and control. Besides at the first time cars of this class got the system “Adaptive Drive” uniting together all the active suspension elements (changing the active stiffness dampers and electronically controlled anti-rolls). Receiving the information from multiple sensors, the computer of new BMW X5 assesses the situation and provides a stable position of the body on the road, changing the essential characteristics. Thereby the banks during the turning are virtually eliminated.

The program Connected Drive for BMW X5 offers a wide range of driver assistance systems and services for even greater comfort and safety. In addition to the head-up display, the adaptive headlights system, the system of automatically switches/dipped beam, the system of park distance control (PDC), and the rear view camera, including the circular view (Surround View), new BMW X5 also has the tracking system for marking, indicators of speed limits and the side-scan system (Side View).

The safety system rises to the occasion. The standard equipment includes front and side airbags, side airbags for head protection for the first-and the second-row seats, three-point automatic seatbelts for all seats with regulator tension force and active headrests for the front seats and ISOFIX fasteners to place a child seat in the rear part of the cabin. Also the standard equipment includes indicators of puncture tires, Runflat safety tires and adaptive brake lights.