Bright symbol of America Ford Explorer appeared in 1990 and soon became the leader in sales in its class in USA and left its competitors far behind. Spacious and comfortable interior, front axle with push button start and possibility to contain five to seven passengers were the determinate things which made the car to won the hearts of customers.

It will be unfair not to mention that Explorer is not intended for those who likes fast driving because of hard rear axle and simple front axle which are not disposed to travelling with high speed.
Explorer of first generation was represented in 5 configurations. If arrange them by price increasing they are: five - or seven-seat basic XL, advanced Sport (only three-door), XLT (only five-door), completed "under an outset" Limited (only five-door) and, at last, smart five-seat Eddie Bauer (generally five-door) with leather seats, cruise control, a stereo tape recorder, the conditioner and other "luxury" options.
After modernization in 1995 the car design was essentially changed: the shape of front part became more streamlined due lowered line of a cowl, front optic and front axle were upgraded totally, what about interior dashboard was changed – it became more smooth with separate central console. Two airbags and aluminum wheel disks were included in standard configuration. High resistance to corrosion was also achieved in upgraded model.
Driving force of Explorer is 4 liters V-shaped six-cylinder engine. Before restyling its capacity made 162 HP, after restyling it became more than 200 HP. Jeep equipped with such engine, possesses enviable dynamics.
Since 1998 liftgate became wider and new lights appeared in back part of a car.

Second generation of Explorer plunged in car market after auto show in Detroit in January 2001– 11 years later after first one. The 2002-model considerably differs from the predecessor. Changes touched not only technical equipment, but also appearance. Car dimensions increased essentially. Front part of a car stood out by monumental lattice of a radiator in combination with new headlights — two batteries of the "radiators" covered with transparent uniform glasses. Powerful fog lamps were implanted in a bumper painted under color of the car. The car received an independent suspension bracket thanks to what holds excellent coupling with the road that considerably increases comfort of driving. Thanks to such design of Explorer it wasn't subject to vibrations. It softly "crosses" well hatches even if they get at once under wheels. The car climbs up high borders softly, without any shake-ups — it was also a merit of the new gear.
Gearbox modes are chosen not by usual lever but by actuator – a driver needs only to push buttons.
«4х4 Нigh»-mode of constant full drive with rigidly connected front axle.
«4х4 Low» – mode of constant full drive with reduction gears.
«4х4 Auto» – mode of automatically connecting front wheel drive (in the conditions of slip).
There is one special thing that makes Explorer transmissions differ from other similar mechanisms: in some situations 100% of engine power can be concentrated in front wheel. For example, while moving by winter road Explorer fall into a deep skid and begins slip uncontrollably, swinging across the course, in such moments the car becomes front wheel and a driver has a chance to correct the situation.

Car saloon is comfortable and practical with big number of different roomy shelves and drawers which will be useful during long-distance trips. 7-seat configuration has three rows of seats which are 2 inches lower and 2.5 inches wider, in comparison with the previous generation. Instead of previous spring axle on the cross levers of unequal length new 2-lever axle is used which in cooperation with new configuration of rear frame essentially improved boarding of passengers in third row. Driver seat was improved by new mechanism of pedal angle regulation. Together with steering wheel and driver seat regulation it makes driver location in the car very comfortable.
There are two engine options for customers choice: 4-litres V6 churning out 213 horsepower and V8 4,6 litres with 242 horsepower. Engines work together with 5-speed automatic gearbox as well as with 5-speed manual gearbox.

Exterior structure is elaborated so that in car crash it will be damaged leaving untouched space of car saloon. Explorer became the first SUV that was equipped not only with front and side airbags but also with so named “curtain” airbags on windows which are especially valuable in case of car overturn. Active safety level is increased also by new systems of stability control, wheel slip control and anti-block system.

The 2002-model Explorer can be characterized as strong, safe, convenient and practice car with nice driving performance.
In 2005 new Explorer generation was issued. It was elaborated with taking into consideration customer wishes and as a result power engine was increased, efficiency was improved, exhaust toxicity was reduced, safety control system was upgraded, noise level became lower, driving became smoother and at last car appearance became more expressive due to design improvement.
The 2006-model is equal to its predecessor in technical characteristics but its design was changed in analogy with undoubtedly more spectacular Ford Explorer Sport Trac. Radiator grid by the middle of a bumper with side slashes of air intakes and round tear-shaped fog lights were inherited from this prototype. Visually car became more squared. Simultaneously with strengthened carcass interior was changed as well. New central console appeared, gearbox lever was moved from steering wheel to central tunnel. Rear axle was upgraded and third row split-fold bench seat appeared. Seats of second row also easy folded if necessary and folded seats of third row increase the volume of cargo area up to incredible sizes.
Optionally luxury leather-trimmed seats Preferred Suede with contrast stitch, navigation system with voice messaging and electric actuator of third-row seat are suggested. Here are configurations in pecking order: XLS, XLT, Eddie Bauer and Limited. 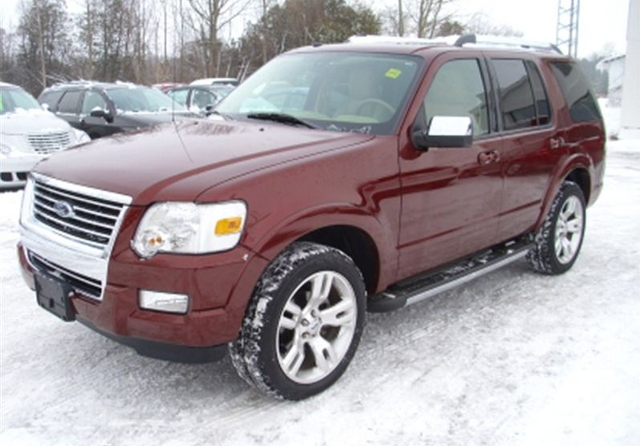 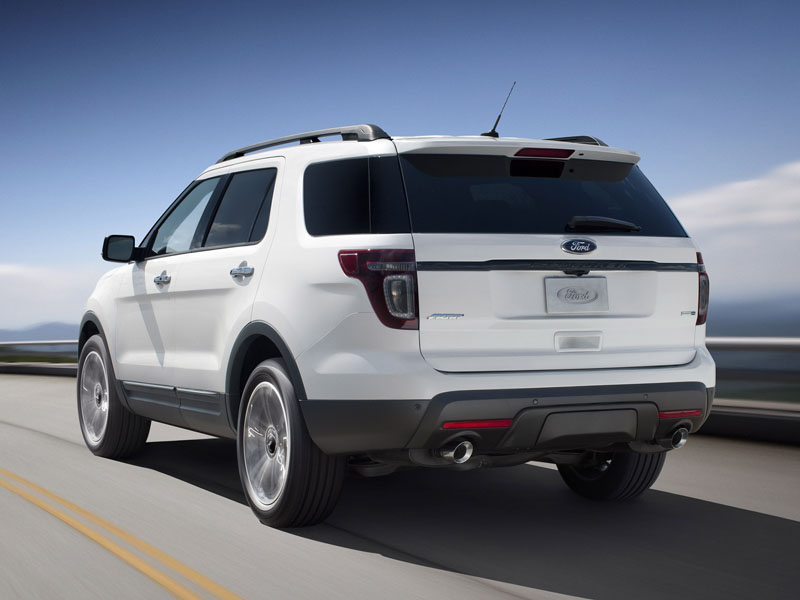 Explorer V differs from its predecessors not only by exterior. The car got carrying truck instead of frame construction and it improved its safety, increased driving smooth and reduced noise inside. In addition to giving up from frame using of aluminum spare parts allowed to reduce car weight. Smooth cabin lines helped to low aerodynamic resistance ratio up to 0,35. Explorer was also equipped by electronic systems of off-road assist instead of hard lock systems and lowering transmission.
Interior is characterized by high quality performance and improved noise insulation. Control panel is made in futuristic style. Created in cooperation with Microsoft company on-bard computer gives to driver and passengers big number of interesting opportunities – from WiFi connection to voice-activated control. Hydraulic amplifier of steering was replaced by electric one. Conditioner was equipped by compressor with changeable power. Among other differences from Explorer of the previous generation it should be noted existence in salon of the new car of the third row of passenger seats (the car has 7 passenger seats).