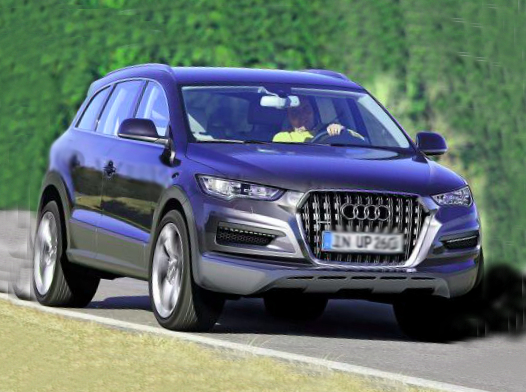 Recently, the official representative of the Audi brand has said that current version of Q7 will be actual a year more, so it meant we would not see the updated variant of that SUV until 2016. However, the Audi’s SUV is needed updates.

Fortunately, the updated version is on its final development stage and the car will be revealed by the end of this year. First, the auto manufacturer planned to launch its updated Q7 last year but due to redesign and some changing in the vehicle’s construction, presentation of the car had to be delayed.

The second reason of delaying the car’s reveal is the new Volkswagen’s platform MLB Evo of next generation. That platform is designed especially for SUVs as well. Owing to the multi-material construction, the new MLB Evo platform is lighter than the previous one.

The platform is also able to adopt alternative drivetrains. The carmaker is ready to confirm the e-tron plug-in hybrid Q7 version.

Moreover, that new platform will be used in other big SUVs of the Volkswagen Group such as the third generation of Porsche Cayenne, Lamborghini Urus, a new SUV of Bentley and, certainly, the Touareg as well.

In addition, according to the auto manufacturer, due to lightweight materials used in the new platform such as carbon fiber and aluminum, the updated version of Q7 will weigh lighter by 650 pounds in comparing with the current version, which has the weight of 5,300 pounds.

Audi will equip its renewed Q7 SUV with 3.0-liter and 4.0-liter TFSI gasoline engines, which will be offered in the U.S. market; the European customers will have an opportunity to buy a diesel version with the 3.0-liter TDI powertrain.

Meanwhile, Audi plans to offer the first plug-in hybrid version of the Q7; in the future, the new Q7 may be also launched even with the diesel-electric setup.

Moreover, there will be a new sporty Q7. That version will get quad-exhaust pipes and improved performance.

We are expecting to glance at the novelty at the show in Paris this October. The official selling is planned to start next spring.