OverviewThis Article: Exterior - Interior - Technology - Ride & Handling - Verdict
» R34 Nissan Skyline GTR Pictures
The R34 GT-R was introduced in January 1999 and bettered its predecessor's performance in almost every department. Basically, the new car is built upon the improved technology of its predecessors. Since Nissan's market research had found out that most people preferred the smaller R32's nimbleness to the larger R33's handling, the R34's length was reduced by three inches to decrease its exterior dimensions and tune the R34's handling more towards that of the R32. In correspondence with other technical improvements, the new R34 has thus become the best Skyline GT-R ever.

Exterior This Article: Overview - Interior - Technology - Ride & Handling - Verdict
» R34 Nissan Skyline GTR Pictures
A large air dam, a long hood, and a flat windscreen - the front almost threatens the one daring to look at it. The clefted front spoiler seems to consist of nothing else but air inlets, and almost appears to touch the road. Staring back at you through narrow, clear, and canted headlights this car looks like a samurai ready to fight.

And ready it definitely is. Standing on 245/40 ZR18 Bridgestone Potenza RE040 tires (developed specifically for this car), the R34 Nissan Skyline GT-R ducks low above the ground, its extensive wheel-housings making it look even wider than it actually is - in reality the R33 is just 5mm narrower.

Understated? Certainly not! Overstyled? Maybe! But aggressive the Skyline GT-R surely looks. The design of the side is more supple in style though, with the low-profile Potenzas on 18-inch six-spoke alloys and the emphasized fenders underlining the coupe's sporty bodylines. Although it is three inches shorter than the R33 (184.1 in.), the R34 GT-R's profile still looks very impressive - even without resembling the front's aggressive styling.

This is mostly true for the car's rear as well. The adjustable rear wing and carbonfiber underbody diffuser (only for the V-Spec) not only distinguish the R34 Nissan Skyline GT-R from the sedans and standard coupes, but also aid its high-speed stability considerably.

Featuring four seats and a decent trunk, the R34 Nissan Skyline GT-R is actually one of the few top-performers that are quite useful in everyday driving. The interior is simple, but tastefully styled, with all controls in easy reach. Even up to speeds in excess of 75 mph the cabin stays remarkably quiet and, apart from the bucket seats, could easily be mistaken for that of a luxury coupe. Even passive safety is paid tribute to with standard driver's and passenger's airbags, as well as optional side-airbags.

But this car is also prepared for sporty driving. The bucket-seats wrap the driver like a second skin and offer perfect lateral support even during tight cornering. In addition, they are no less comfortable for long-distance rides, as well. The sporty touch is underlined by aluminum applications in the center console. For the boy-racers among us, there even is a 5.8-inch dashboard display, substituting for the gauges of previous GT-R versions and providing all necessary (and unnecessary) information about the car which can even be downloaded after the ride.

Similar to earlier versions, the RB26DETT drives the GT-R forward with an official 280hp at 6,800rpm (restricted by the Japanese regulations). But as the UK GT-R Register found out, 328 hp at 6,400rpm seem to be the real output. Modified camshafts for improved valve timing and a new stainless steel exhaust system with reduced back pressure make the engine more flexible thanks to a better torque curve and higher peak-output of 289 lb-ft (397 Nm) at 4,400rpm. These changes have also make this RB26DETT smoother and quieter in comparison to earlier versions.

Additionally, turbo spool-up time is enhanced by the new smaller twin ceramic turbochargers which feature variable boost timing, work with a maximum pressure of 0.4bar and use twin ball-bearings to minimize friction. Even though, as known from most turbo engines, there is quite some lag until the blowers really start going about their job at about 3,500rpm. But since the redline is still at an impressive 8,000rpm, there remain plenty of revs to work with.

The engine's sporty character is aided by a 6-speed Getrag gearbox, which is a great improvement over the R33's 5-speeder and convinces with short throws and well-defined gates. The new 6-speeder features close ratio gearing for the first five speeds, instead of the first four speeds as seen on the R33. Like in earlier GT-R's, power is delivered via the ATTESA-ETS (ATTESA-ETS Pro on the V-spec) AWD system to all four wheels, aided by a limited-slip differential, to ensure maximum traction in all situations.

Handling over the predecessors is further improved by a 50% stiffer body-structure and a sport-tuned suspension with a multi-link setup at the rear and MacPherson struts with an additional link up front.

The V-Spec variant uses a stiffer setup than the standard GT-R, but common to both versions is the Super HICAS all-wheel-steering system and anti-roll bars front and rear.

Brake Cooling is improved by large ducts in the front spoiler to channel air to the front brake discs. Additionally, the front-undertray creates a low-pressure area outside the wheels, to draw the heated air away from the brakes, thus improving their cooling. 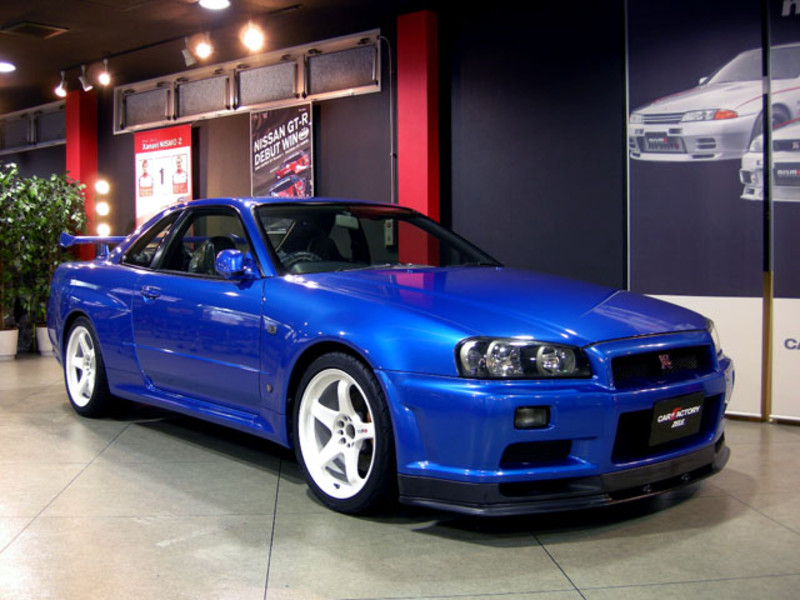 The R34 GT-R V-Spec's (and only the V-Spec's) aerodynamics are dominated by a front spoiler and a carbonfiber rear diffuser. These regulate the airflow along the car's underbody, thus creating downforce which pulls the car down on the road. This leads to improved handling and stability especially at speeds in excess of 50 mph, but also enhances stability during cornering and braking.

Aerodynamics on all GT-R's are further improved by a new rear wing. The R33's single-wing design has been dropped in favor of a dual-level type wing on the new version. The R34 Nissan Skyline GT-R's rear wing now features a stiff main-wing with a flap that can be adjusted in four angles. 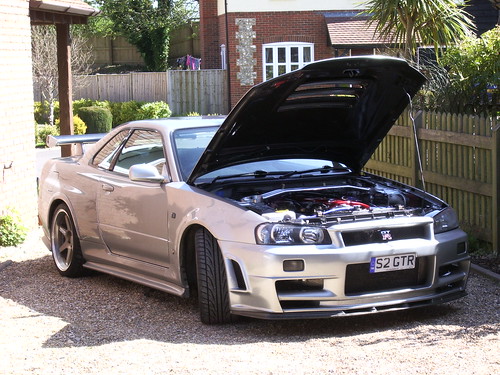 Regarding the outside dimensions of the GT-R (it is as big as a Subaru Legacy and almost as big as a VW Passat), one can hardly imagine that this car is sporty. Of course it looks evil with all those aerodynamic add-ons, but taking the weight of about 3,400 pounds into account, this vehicle appears too large to be quick.

Getting into the Skyline is easy and the inside is quite comfortable - at least in comparison to others of its kind. The bucket seats hug the driver like a second skin and hold him tight even during fast cornering, but are still very comfortable. The seating position could be better, but otherwise ergonomics are fine, with all controls in easy reach of the driver. But honestly - this is a sports car, so who really cares about ergonomics and comfort here.

This car is supposed to entertain!

And the R34 Nissan Skyline GT-R brings all the guts to do so! Start the engine and you soon notice this is a direct descendant of the 1995/96 500+hp GT1 engine. The redline is at an astonishing 8,000 rpm, which promises a lot of fun. Press the accelerator though, and the RB26DETT will need at least 3,500 rpm until it really gets going - before that it is flat and lifeless.
Still, keeping the engine in its best power-range is quite easy with the perfect 6-speed Getrag gearbox. The new transmission is precise and offers good feel, with a clutch that is light, sharp and progressive. Thus, launching the car is quite easy: Drop the accelerator and dump the clutch at 8,000 rpm. 1st gear goes until 44mph, so one shift is necessary until 60 mph is hit in 2nd gear after 4.9 seconds. Keep the pedal planted and the Skyline passes the 100 mph mark in 12.3 seconds - both times faster than a Porsche 911 Carrera.

The R34's ride is quite firm (even more so in V-Spec form), but not uncomfortable. When really pushing this car hard, one comes to admire this setup. The state-of-the-art suspension makes sure the Potenzas touch the road with maximum efficiency, although, especially in V-Spec form, the wide tires tend to tramline. But generally the Skyline feels extremely planted, almost glued to the ground and instantly generates respect and extreme confidence.

Part of this confidence can be attributed to the pin-sharp steering, supported by the Super-HICAS all-wheel-steering system, which converts the driver's inputs the moment he does them. Once driven, the car does not seem as large anymore, thanks to all the technology that effectively helps to fight physics. One is still aware of the car's size, but that does not at all hinder in exploiting its advantages. It just prevents from going to far.

What really distinguishes the Skyline from any other car though, is ATTESA, the GT-R's all-wheel-drive system. ATTESA-ETS usually operates in rear-wheel-drive setup, but when necessary (i.e. when a wheel spins), it can electronically shift up to 50% of the engine's torque to the front wheels. In effect, the GT-R behaves like a RWD rather than an AWD car, just with some more front-end bite. Even drifts are possible with ATTESA, which is usually almost impossible in AWD cars. Actually, during drifts, the system tries to distribute the power in a way that even supports the drifting rather than hinder it. But even more so, ATTESA helps stabilizing the car, which is especially helpful on bad B-roads. And those are where the Skyline really shines. Hardly any car feels as planted here and makes you feel as much a hero as a Skyline GT-R does - especially in the wet. You are always aware of the car's mass and its desire to oversteer, but where other cars start losing their grip (i.e. other cars like the Impreza WRX and Lancer Evo), the Skyline still keeps its composure and inspires confidence. 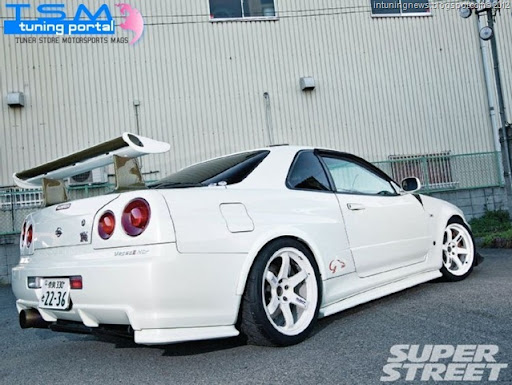 There might be other cars with lots of grip, but hardly any of these will respond the way a Skyline does. Driving hard into corners one can feel the all-wheel-drive system distributing the torque between the wheels for maximum stability. Any driver input is converted into action immediately without delay. In correspondence with the 56% stiffer bodyshell over the R33, the GT-R communicates with the driver as if it was one with him.

This responsiveness is even more amazing considering the Skyline's uneven weight-distribution of 57% in front and 43% in the rear. Usually a layout like this would be expected to be dominated by understeer, but due to ATTESA's intervention, the car is given a more sportive, rather oversteering character. Be careful though, pushing the car to far to its limits may result in a sudden loss of grip at the rear wheels - partly because of the uncompromising Bridgestone tires.

But where the Skyline cannot hide its nose-heavy layout is on the skidpad, since ATTESA does not help much here. The behavior is dominated by understeer, although with the right balance between smooth driving and aggressive throttling, the GT-R still reaches a road-holding of 0.88g.

Godzilla's active ability is rounded up by a standard-setting Brake system. The Brembo brakes offer good feel and bite instantly, but unlike most other cars, the ABS does not intervene immediately, but lets the tires lock for a moment before it cuts in. The result is a braking distance of an overwhelming 151 feet from 70-0mph - over 10 feet less than a Porsche GT3.