The Polo debut took place in 1975 at the Motor Show in Hanover. It became the third front-wheel-drive car of a friendly Volkswagen family after Golf and Passat. Polo was based on Audi 50. The designer was the famous Marcello Gandini. The first Polo was an economical model (its price was DM7500) equipped with an engine of 40 hp and the high speed of up to 132 km/h. A year later the “luxury” version of the Polo L was produced. It was equipped with a 1.1 liters engine issuing of 50 hp. This model was very popular at its time.
In January 1977, the 2-door sedan Derby based on Polo was introduced, named “Derby” by Journalists because “Polo” + trunk = “Derby”. The trunk capacity was 515 liter. This model immediately became popular among European customers according to a few reasons. The first reason was a spacious and comfortable cabin and a practical body of a car, the second one was excellent technical characteristics, and in the third place, the car was available at a price that was the most important of its quality.
The first generation models were equipped with carbureted 0.9 - 1.3-liter engines of 40-60 hp and with a four-speed manual gearbox.
For the period from 1977 to 1981 about half a million cars was produced. The high popularity of Polo can be explained by diverse range of engines and the construction quality.
Six years later after the debut of the model, the second-generation of Polo was introduced. It differed with a lot of body modifications; as the base was a practical hatchback with a vertical rear wall, presented in August of 1981. The Derby sedan was produced only in October of that year. Debuting in September 1982, the three-door model with more inclined rear wall of the body called Coupe. All three versions were much in demand.
In autumn of 1985, there was the debut of the sports version Coupe GT G40. An engine of 115 hp accelerates a car up to 100 km/h in 9 seconds. The top speed was 195 km/h.
In October 1990, during the modernization most defects of the design and ergonomics were repaired. The exterior of the restyling differed got a more streamlined front part with large rectangular headlights. It got also the new interior. At that time there were a 1.4-liter diesel engine of 48hp, with the city fuel consumption was less than 5.5 liters/100 km and a five-speed manual gearbox. 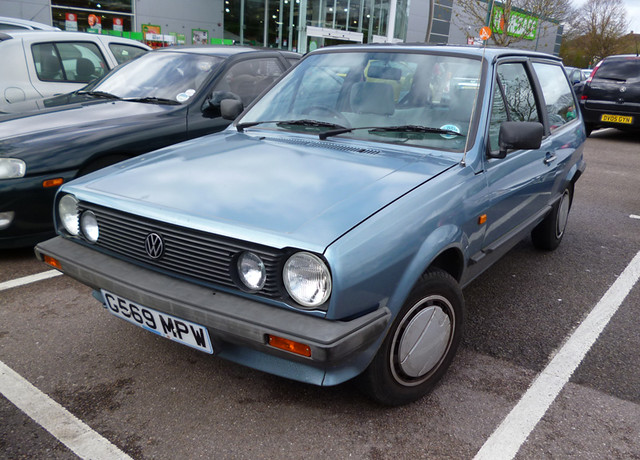 The engine range of models of 1990 - 1994 consisted of four injection engines from 45 to 113 hp (carburetor versions were stopped producing to 1990) and the aforementioned diesel one. Three gasoline engines had the working volume of 1.3 liters producing the output of 55 hp, 75 hp or 113 hp. The simplest engine had 1.0 liters and 45 hp.
On the whole, this generation was in high demand. For 13 years of production 3 millions cars were sold. Although the model was popular, but it was outdated to the early 90`s, and in 1994 it was replaced by a model of the next generation Polo III, designed on the new platform.
The premiere of the third generation of Polo took place in 1994 in Paris. There were 3 and 5-door hatchbacks since that year. Dimensions and weight of Polo increased quite significantly for two centuries. Thus, the length was 3715 mm; the equipped weight increased from 685 to 880 kg. In 1995, the sedan was backed to the model range and called Polo Classic (previously the sedan’s name was Derby). It was based on the Seat Cordoba platform and this model was assembled at the Seat factory in Spain. Sedans were longer than 3 and 5-door hatchbacks by 390 mm and it had the spacious trunk of capacity of 455 liters. In 1997, a station wagon Polo Variant was introduced based on the station wagon Seat Cordoba Vario and it also was produced in Spain.
The interior become more respectable. The inside visibility was at the highest level.
The engine range included gasoline and diesel engines with the output of from 45 to 110 hp. The leader of the model range was the modified Polo GTI equipped with a 1.6-liter engine of 125 hp. The top speed of this car was 205 km/h and the acceleration to 100 km/h in 8.0 seconds. The hatchback had the best aerodynamics: Cd = 0.32 in its class.

During 5 years of production of Polo III designers upgraded 3 - and 5-door hatchbacks, but sedans and station wagons were still unchanged. Restyling models were produced for a total of 2.5 years and the base of designed versions of the following models. Volkswagen updated about 60% of the parts and details but the exterior was not changed. There were slightly different headlights and grille, bumpers and side view mirror were painted in the body color. But interior got a lot of changes: the dashboard was the same as the Lupo one and dials were edged.
Volkswagen Polo III was produced from 1994 to 2001.
In September of 2001 at the Frankfurt Motor Show there was the presentation of the fourth generation of the hatchback Polo.
The fourth generation Polo was changed both in style and the technical equipment. In this case, a car grew up significantly longer by 400 mm, wider by 90 mm and higher by 120 mm. This model was based on the Skoda Fabia platform. A character of the exterior of Polo IV was four round headlights.
There was a choice of two three-cylinder gasoline engines (1.2-liter of 54 or 64 hp), a couple of four-cylinder gasoline engines (1.4 liters of 75 or 101 hp) and three diesel engines producing from 64 to 101 hp. Besides a manual gearbox there was a chance to set a four-speed automatic but only with a 75-hp engine.
The exterior of the new Polo was solid, prestigious and laconic. Its interior was made in similar style. The car was manufactured with high quality of laser welding, which allowed minimizing gaps between the body parts and reducing the noise level at high speeds.
Polo had very good safety options provided by a rigid torsional body structure and complemented by the equipment of active and passive safety. The elements of passive safety were the improved system of airbags. Airbags for a driver included 64 liters, for the front passenger - 95 liters, and side airbags - 12 liters. The active safety was provided by electro-hydraulic power wheel steering and four-channel ABS included as a standard feature. The power wheel steering could change the power, depending on the speed and weight of the car, so a driver could always control steering. According to the request of customers ABS might be supplemented by ESP, combined with a hydraulic brake assist.

In 2003 the model range of Volkswagen was supplemented by a sedan Polo Saloon and the youth version Polo Fun. The new sedan Polo differed in a fully revised structure of a body from B-pillar to the rear one. It was longer than the 5-door hatchback by 28 cm. The cabin became even more comfortable (especially the rear seats), and the trunk capacity was increased to 432 liters. Engineers paid a lot of attention to the anti-corrosion protection and that’s why the Polo body was exposed with galvanization. This model was available in two levels of equipment and four engines: two diesel engines of 47 hp and 55 kW and two gasoline engines, issuing 55 hp and 74 kW.
The main features of Polo Fun were: increased the ground clearance by 20 mm, new front and rear skirts, plastic fenders and doorways, 17-inch aluminum wheels with 215/40 ZR17 tires. The engine range of Polo Fun consisted of four gasoline engines of from 55 hp to 100 hp, including the FSI engine, and two diesel engines with the output of from 75 hp to 100 hp.
According to the number of features and the quality of interior materials Polo IV did not yield in Golf and Passat. Naturally, it affected the prices and sales. Volkswagen Polo IV failed to become popular in Europe. The model was sold worse than the previous generations of Polo.
The famouse TV show “Top Gear” called VW Polo III the best car of the super-mini class in 1998, this time established a failure. According to rating, based on interviews, Volkswagen Polo IV was seriously inferior to its competitors such as the Ford Fiesta, Renault Clio, and Peugeot 206.

In 2005 Volskwagen updated Polo of the fourth generation. There were major improvements to the exterior. The designer of the company (Walter de Silva) changed the design of bumpers but the model was not a hit anyway. The restyling only slightly augmented a demand for Polo. In 2007 the updated VW Polo Classic was presented.

The fifth generation of Volkswagen Polo was presented at the Geneva Motor Show in 2009 and bestowed a title of “The car of 2010” in Europe. Polo V was based on Volkswagen platform PQ25, as Ibiza from the Spanish Seat. The length - 3970 mm, the width - 1682 mm and the height was 1485 mm. The wheelbase was 2470 mm and gauge - 1463/1456. The trunk capacity was 280 liters, but with folded rear seats (including the proportion of 40/60 of the version Comfortline) it increased to 950 liters. The total equipped weight of the 5-door hatchback with a 1.2-liter V6 gasoline engine was up to 1070 kg, a 90-hp turbo engine with DSG – up to 1180 kg.
Polo became more dynamic, stylish and modern. The exterior got manliness and even a bit of aggression. The updated front end gave the car swift features. Headlights were changed; the bright V-shaped grille emphasized the strong character, aerodynamic of side view mirrors with integrated indicators was improved. The central design element of the back end was the main round lights. Their form emotionally suited the headlights, giving the back part of novelty the energy and personality.
The dynamic image of the car was also emphasized by wheels and tires. Volkswagen offered a wide range of steel or alloy wheels that could give Polo a more solid look. There was a wide range of exterior colors: six metallic paints, including a new color - gray Silver Bird, four types of pearl varnish, including the new blue one - Olympia. Polo were available in tires from 175/70R14 to 185/60R15 (with more powerful gasoline and diesel engines). The car could be equipped by 17-inch alloy wheels with 215/40R tires as the extra charge.
The interior was restraint and yet with taste: really nice plastic of the dashboard, comfortable seats, convenient placed controls of various functions and systems – everything was so practical. The driver’s seat was comfortable, fairly rigid, could be adjustable in height according to both miniature and very tall drivers. The steering wheel was also adjustable.

The engine range of Volkswagen Polo of 2009 consisted of a 1.2-liter V6 gasoline engine of 60 hp. The maximum power of the same engine with a 12-valve train was 70 hp. A 1.39-liter with 12-valve train engine produced up to 86 hp. The main innovation of Polo V was “subcompact»” TSI with gasoline direct injection, turbocharger and the air-water intercooler under the hood. This 1.2 liter engine had the output of 105 hp. In addition to gasoline engines there was also a 1.6-liter turbo-diesel TDI CR with an electronically fuel injection common rail and a particulare filter. This power plant was available in: 75, 90 and 105 hp
Volkswagen Polo engines have low fuel consumption and reduced emissions. Engines work with a 5-speed manual gearbox, except TSI, which equipped with a 6-speed manual. There is also a 7-speed “robotized” DSG (two clutches, switching without an interruption in power). But the chassis is not changed the front suspension is still McPherson; there is a torsion wishbone suspension from the rear.