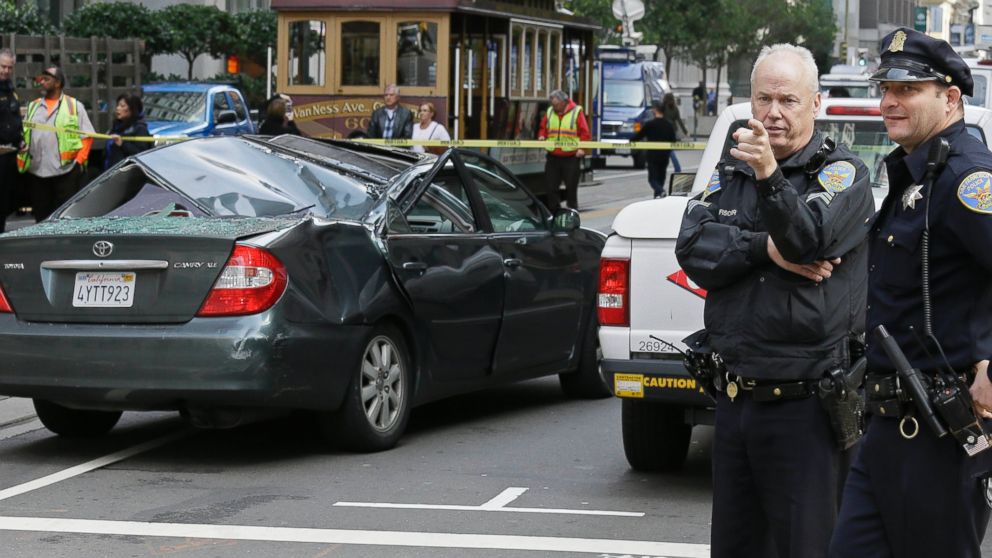 A worker fell screaming 11 stories from the roof of a bank building Friday morning onto a moving car, crushing its roof and sending shattered glass flying into the street, police and witnesses said.
The man suffered critical injuries, but he was conscious, and the driver was not injured, police said.
Witnesses described seeing a blue streak and the man's shadow as he fell and then hearing shattering glass as he hit the car and then rolled onto the ground. The roof of the car, a green Toyota Camry, was smashed in, and the rear windshield shattered.
Bianca Bahman, who was on the corner where the man fell, said she looked up to see his shadow and ran for cover.
"As he was coming down, he was definitely screaming," Bahman, 31, a pre-medical student at San Francisco State University who was on her way to the gym, said. "It all happened so quickly. It was so instantaneous."
The man, identified by police only as window washer, was moving equipment on the roof of a bank building in the heart of San Francisco's financial district and not on a window-washing platform when he fell, San Francisco police Sgt. Danielle Newman said. The platform was on the ground at the side of the building, and cables were hanging from its sides. It was not clear whether the man was setting the platform up, but he was working with a partner, police said.
Sam Hartwell, 56, of San Rafael, said he was walking to the building the man fell from for a meeting when he saw something blue falling.
"I heard the loud thud and the shattering of the back of the car," he said. "At that point, I realized it was a body."
He and about 20 other people ran to the man, who was on his back. The man was lucid, though he was bleeding.
"He understood we were with him," Hartwell said.
The bystanders, who included a nurse, put clothing on the man as they waited for the ambulance.
Hartwell said of his reaction, "It was utter, immediate shock. How do you react to something like that?"
Dozens of people gathered around police tape after the accident, as officials cleaned up blood, glass and a shoe that were lying in the intersection. The driver of the Camry did not want to comment, Newman said.
Recent incidents involving window washers show the dangers of the job.
Last week, the collapse of a World Trade Center scaffold left two window washers dangling from the nation's tallest skyscraper. The workers were trapped 68 stories above the street when a cable suddenly developed slack on Nov. 12.
The workers held on to the teetering platform for two agonizing hours. One called his wife during the ordeal, fearful that it might be his last opportunity to speak to her. Firefighters used diamond cutters to saw through a double-layered window and pulled the men to safety. They were not injured.
Last month in Irvine, California, two window washers stuck for hours near the top of a 19-story high-rise were pulled to safety by members of a search-and-rescue team.
It was unclear how the workers became stuck on the side of the office building near the San Diego Freeway. Neither worker was injured, authorities said.
Also last month in downtown Oakland, California, two window washers were stranded outside the 19th floor of a high-rise for nearly two hours before employees inside realized they were in trouble and called for help. They also were not injured.